After two semi-final agonizing semi final exits in the past three seasons Abbeyfeale started the 1964 campaign against a talented Killarney side.
On a windy day Killarney had the better of the first half, however the second half say the Abbeyfeale men turn the game and run out 11-6 winners.

A new look young Casteleisland team came to Abbeyfeale to contest the Area Final of 64.
Local derbies are never easy and the inexperienced Castleisland team threw everything at Abbeyfeale in the first half.
A try from Bernard Broderick before half time finally settled the Abbeyfeale lads and they went on to run out winners by 16pts with a strong second half.

Abbeyfeale in their third semi final in four years were hoping to make it through to their first final.
As was the case in the 1961 semi final, the 1964 Limerick Area champions Shannon stand in their way. 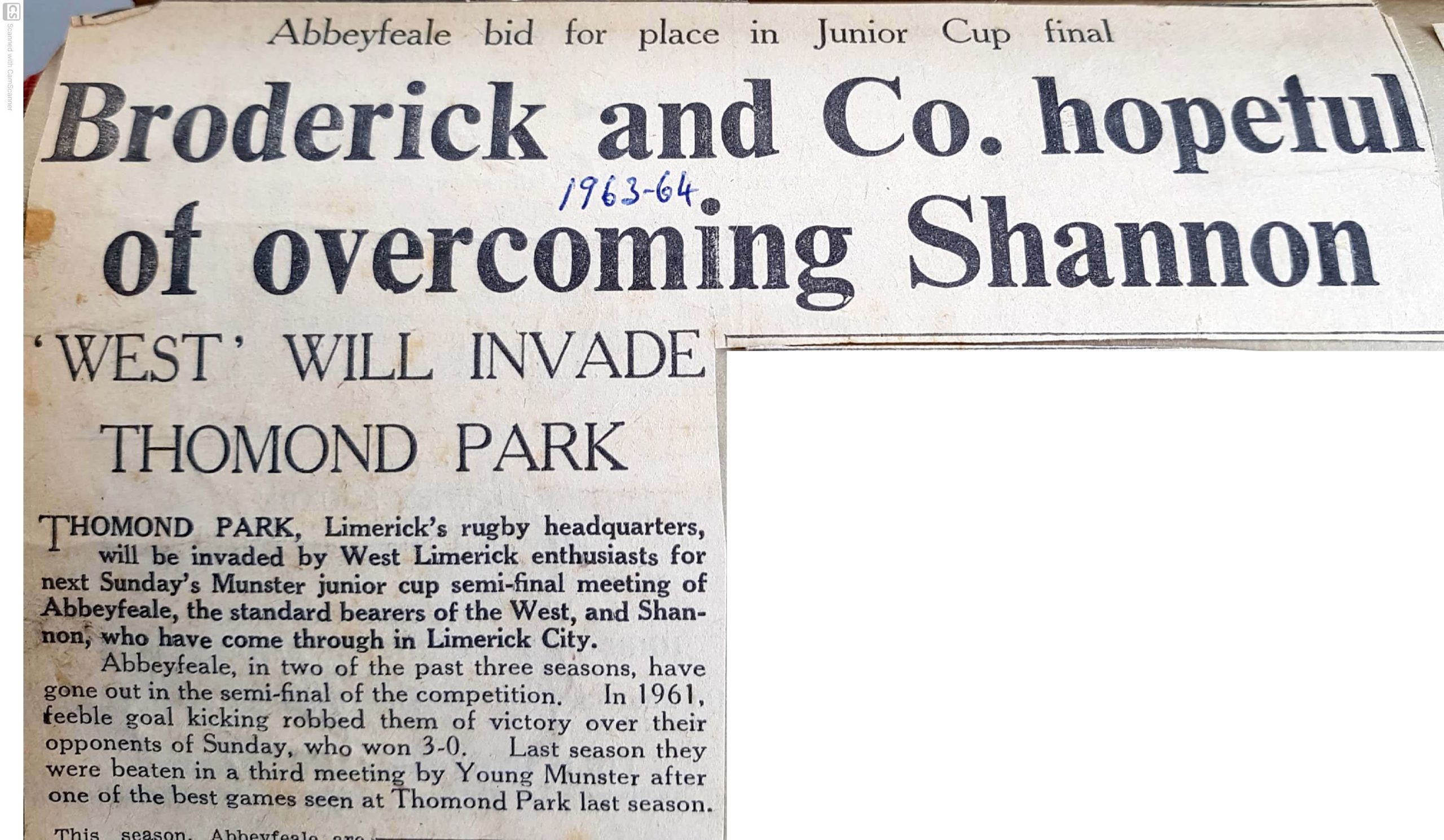 Roared on by a huge following Abbeyfeale dominated the semi final versus Shannon in every way but the one that mattered on the scoreboard.
Another chance to reach the final had been passed up but there was still a replay to come.

Shannon were much improved for the replay making the game a more even battle throughout. Shannon took the lead when a penalty came back out of the posts and was recycled for a try.

Abbeyfeale fought back but like the first game missed a number of shots at goal. When it looked like it was going to be another one of those days a new hero emerged. Franco Kelly stepped up to take his first ever kick at goal and nailed it to tie the game 3-3 and send the semi final into extra time.

Shannon had the first chance to strike in extra time but missed. Abbeyfeale were then awarded another penalty in what would be the last kick of the game. Franco stepped up again, and the rest as they say is history.
The semi final hoodoo was broken and Abbeyfeale progressed to the MJC final to play Nenagh. 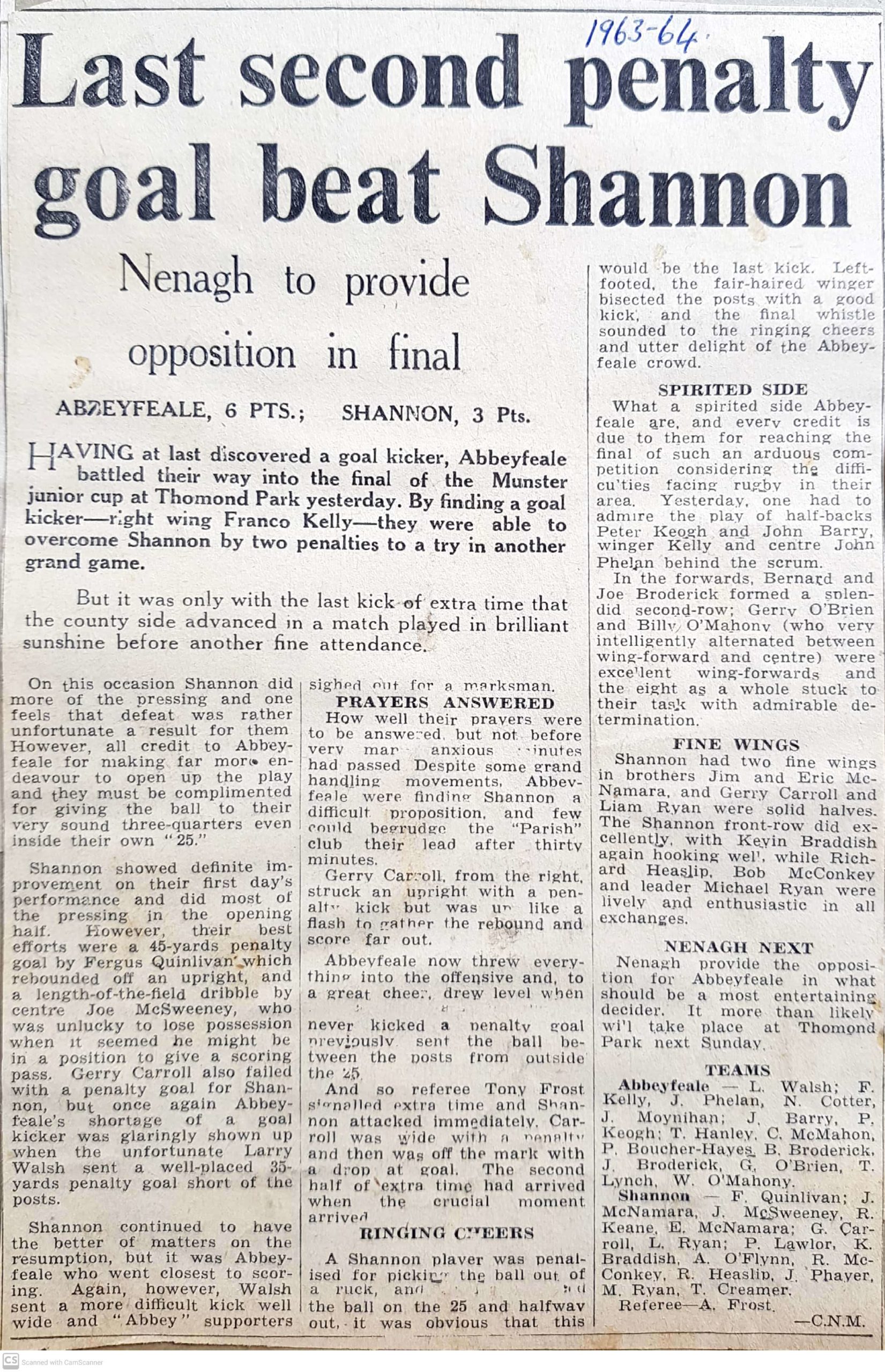 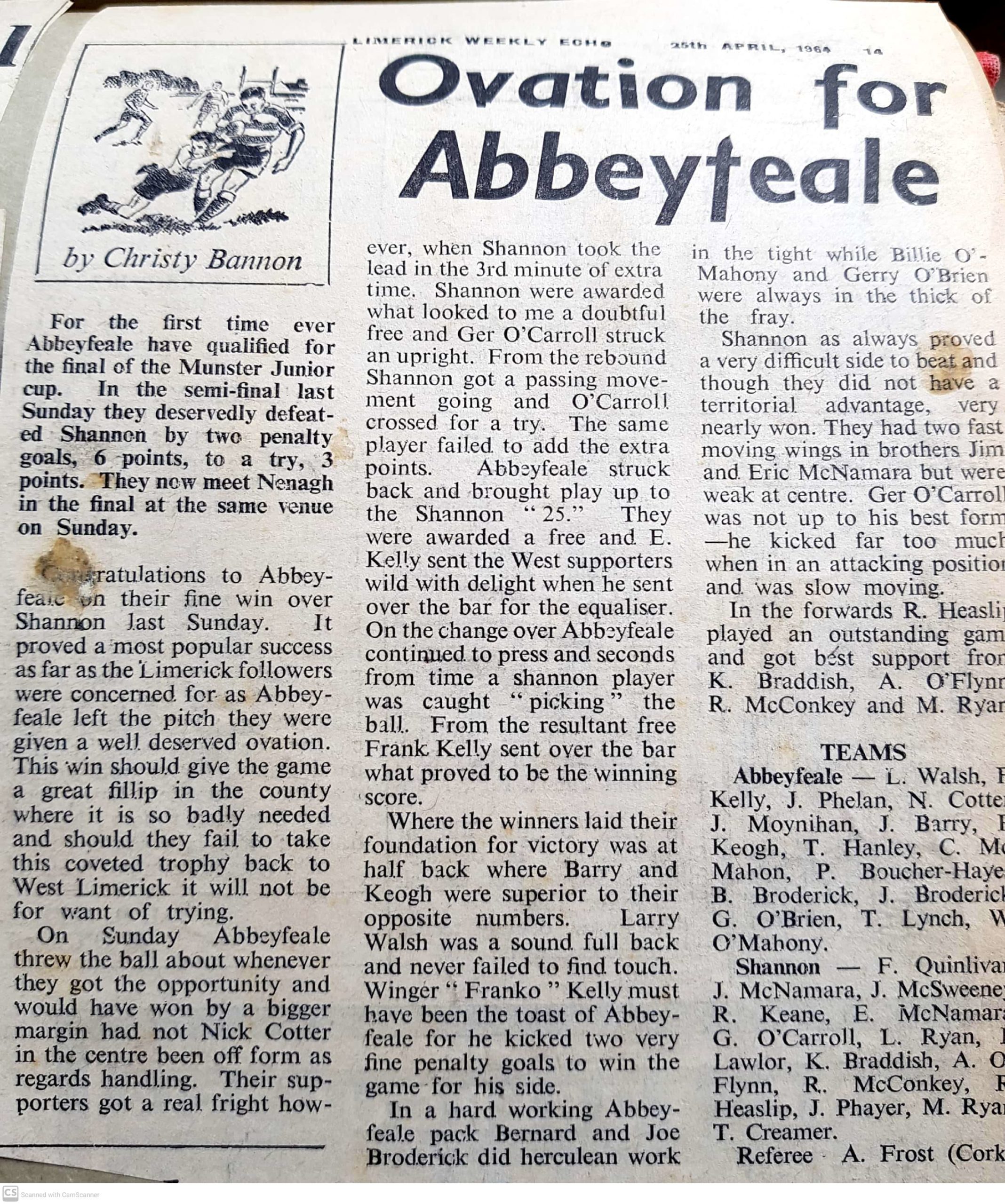 Abbeyfeale team that played Shannon in MJC SF in Thomand 1964 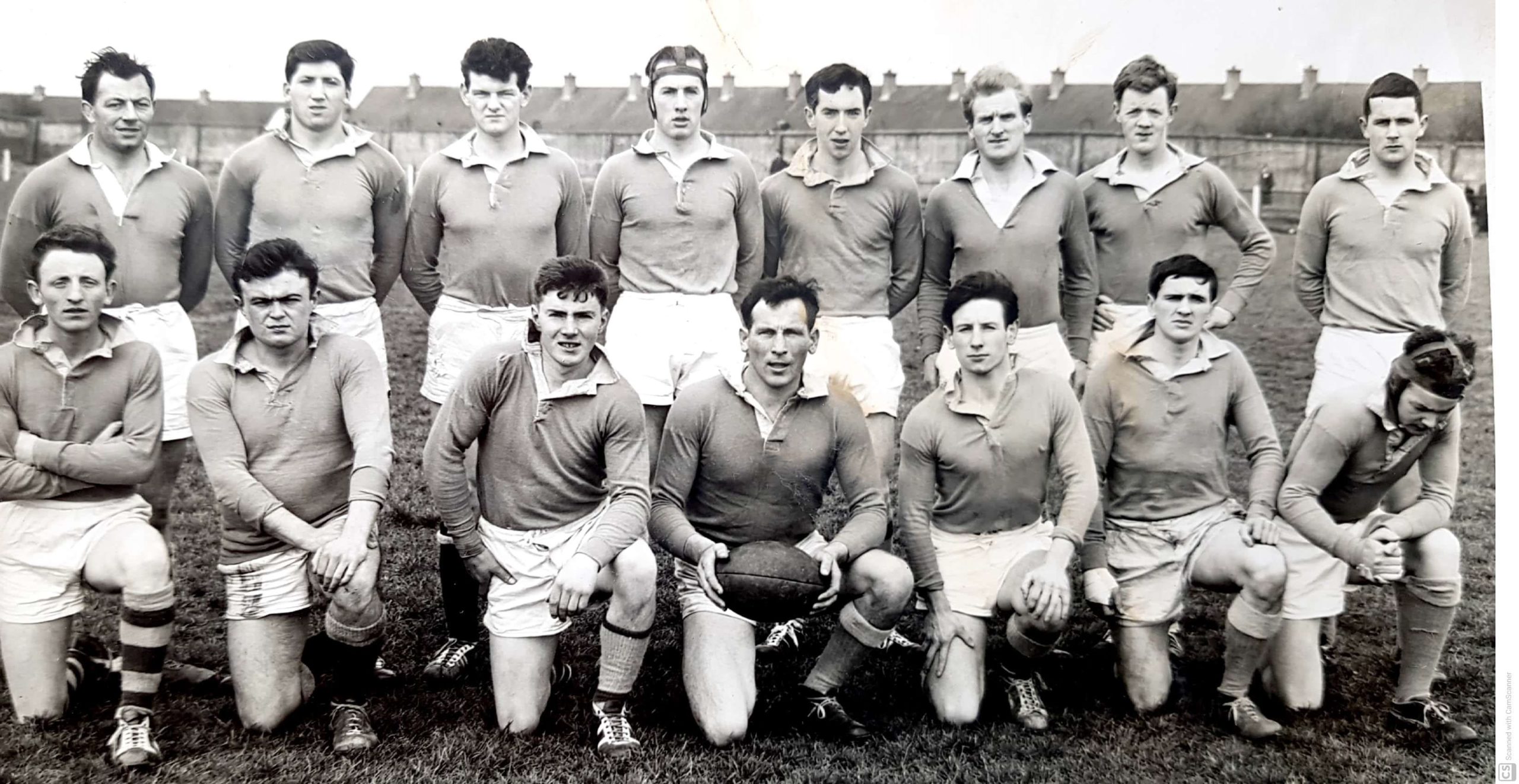 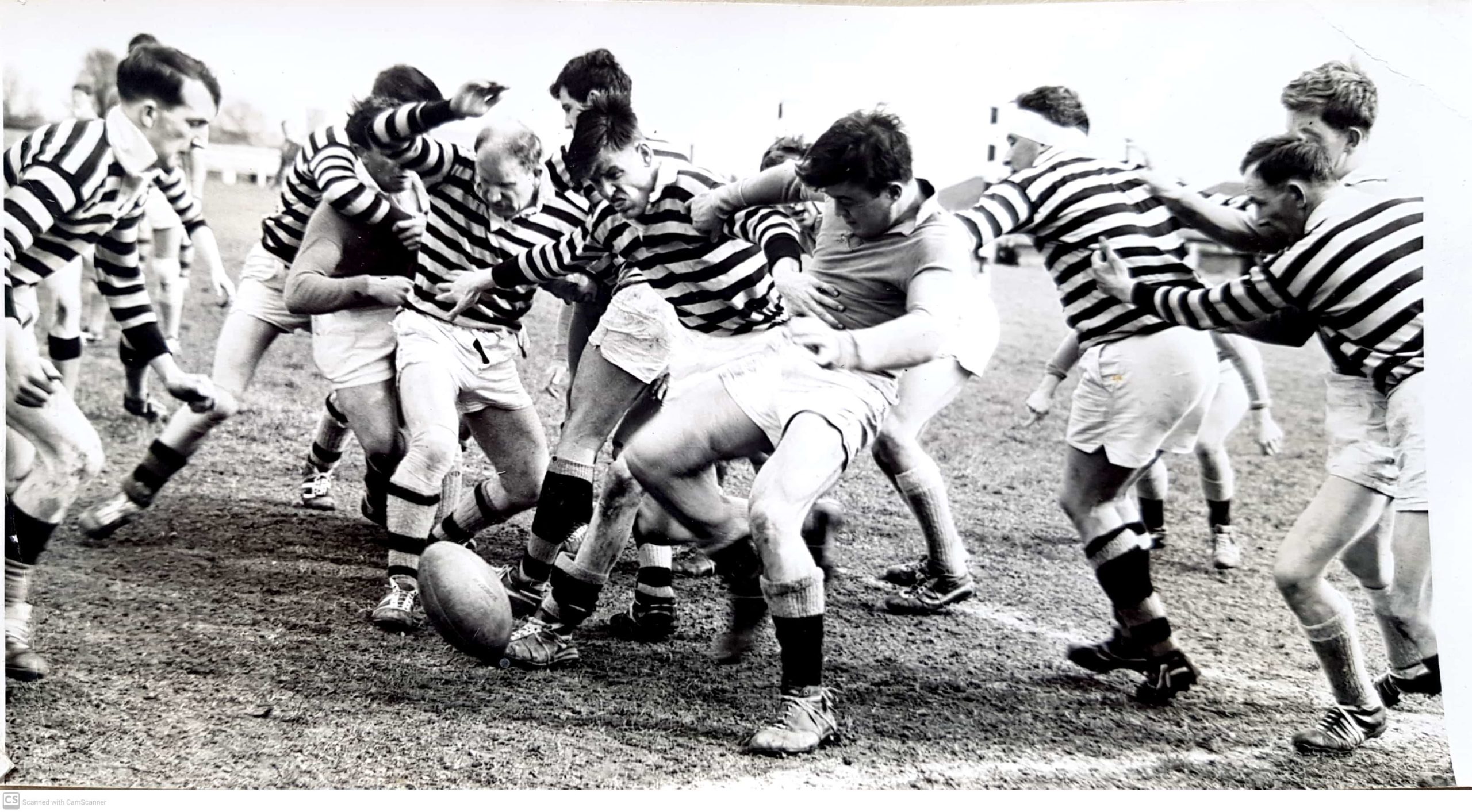 A huge turnout from both sets of supporters created a terrific atmosphere at the final. Nenagh started well but as the game went on it was clear Abbeyfeale were the better side.
Jim Moynihan collected a wickedly bouncing ball to go over for what would be the winning try. Abbeyfeale played some fantastic running rugby throughout the second half and although they didn’t increase their lead, they ran out worthy winners.

The bonfires burned brightly across Mountmahon as the team made its way home from Limerick to celebrate the night in Leens hotel. 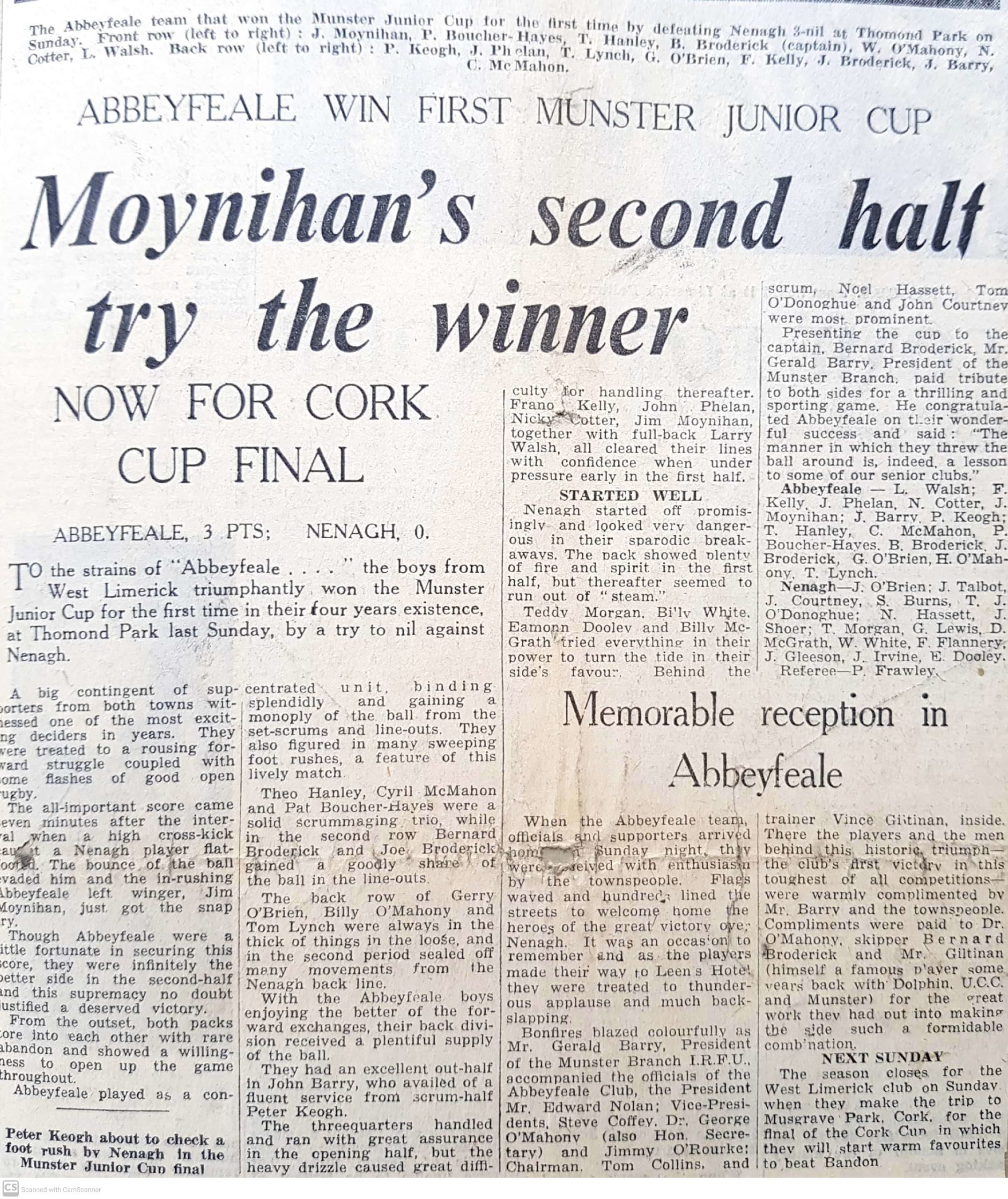 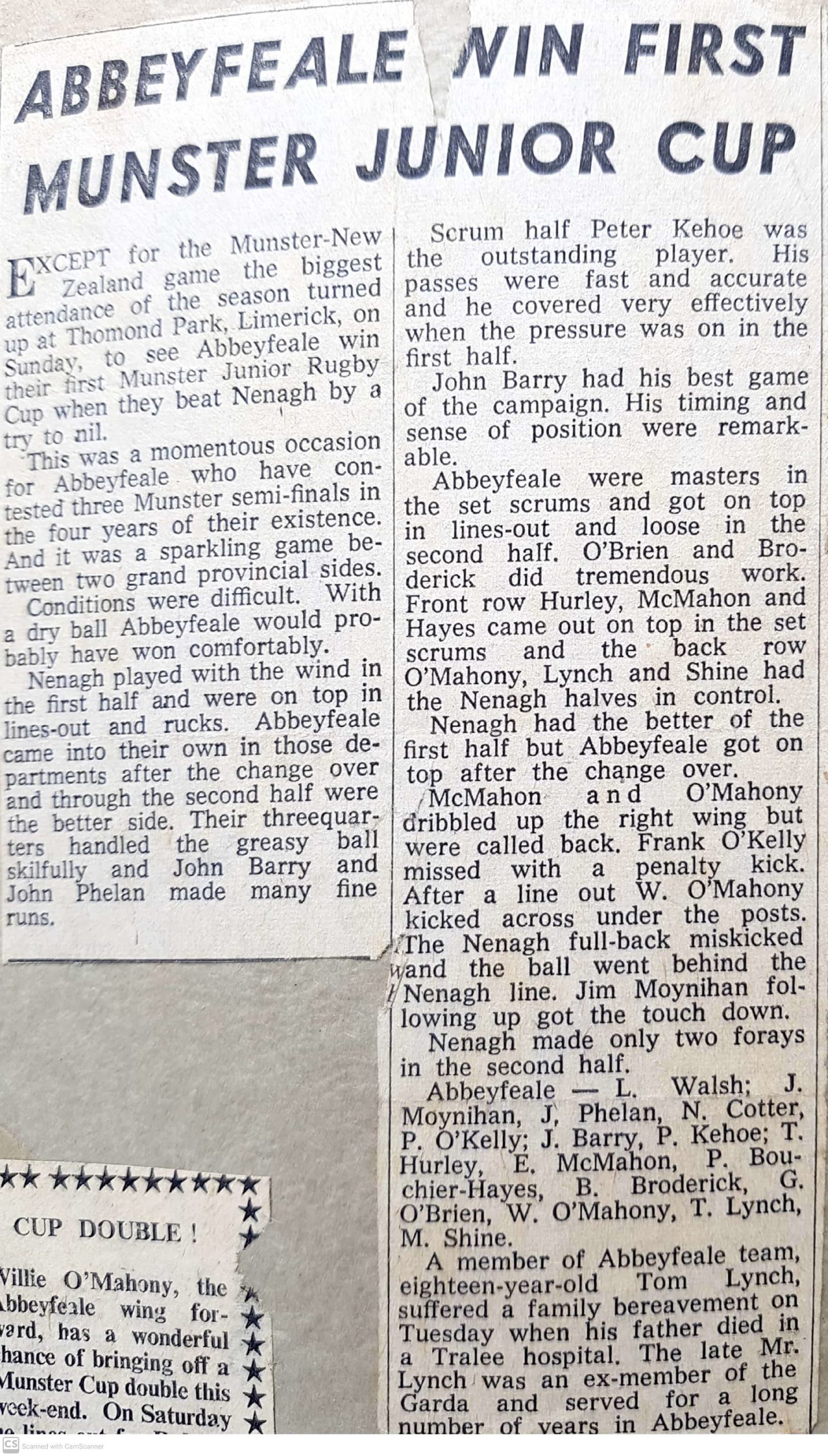 Abbeyfeale team that played Nenagh in MJC Final in Thomand 1964 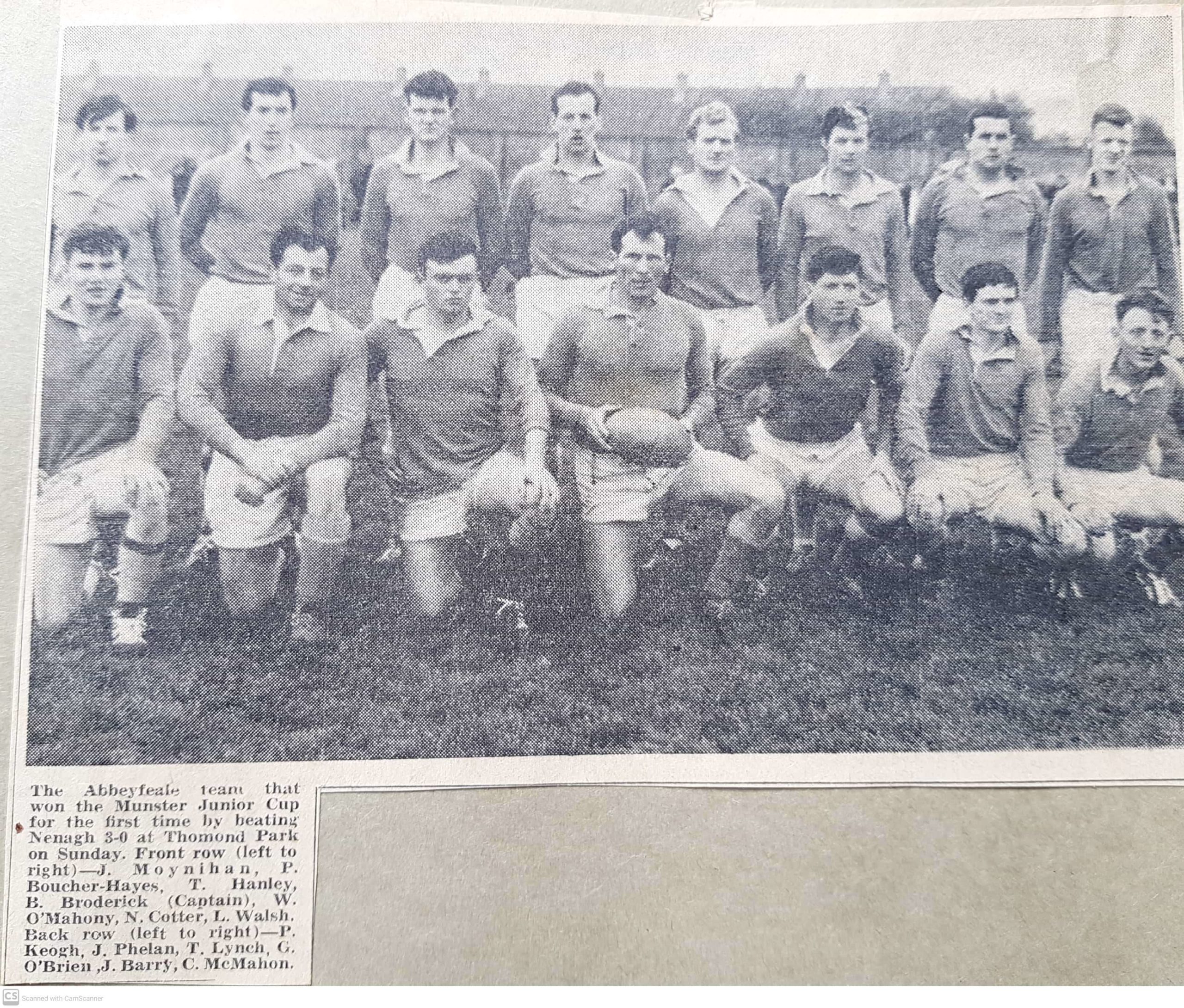 A week after the MJC win Abbeyfeale were celebrating a unique double by beating Bandon in the Cork County Cup final in Musgrave Park.
Once again the Abbeyfeale forwards laid the platform for victory. An excellent break from Billy O’ Mahony leading to the winnig try for Nicky cotter in the corner. 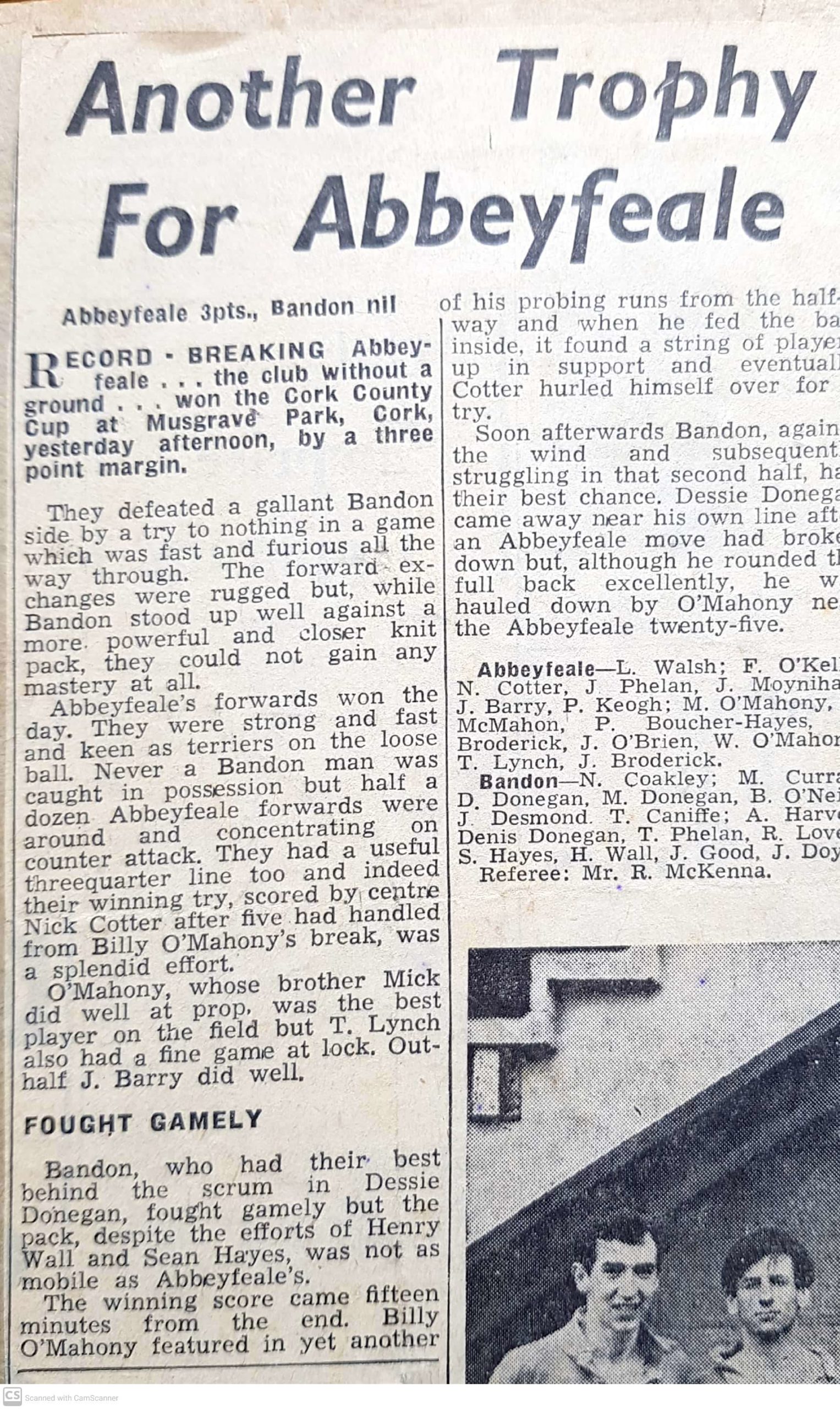 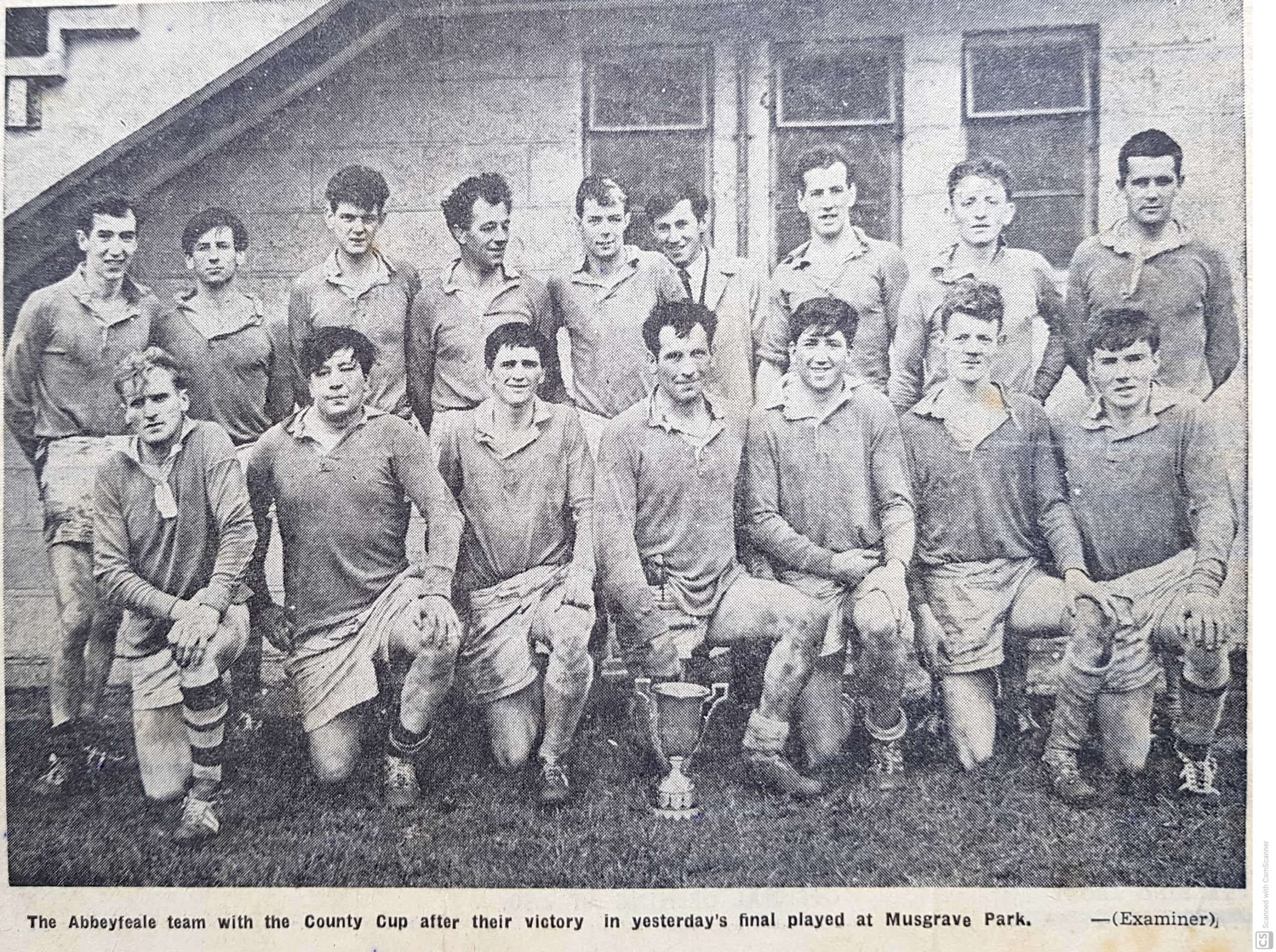 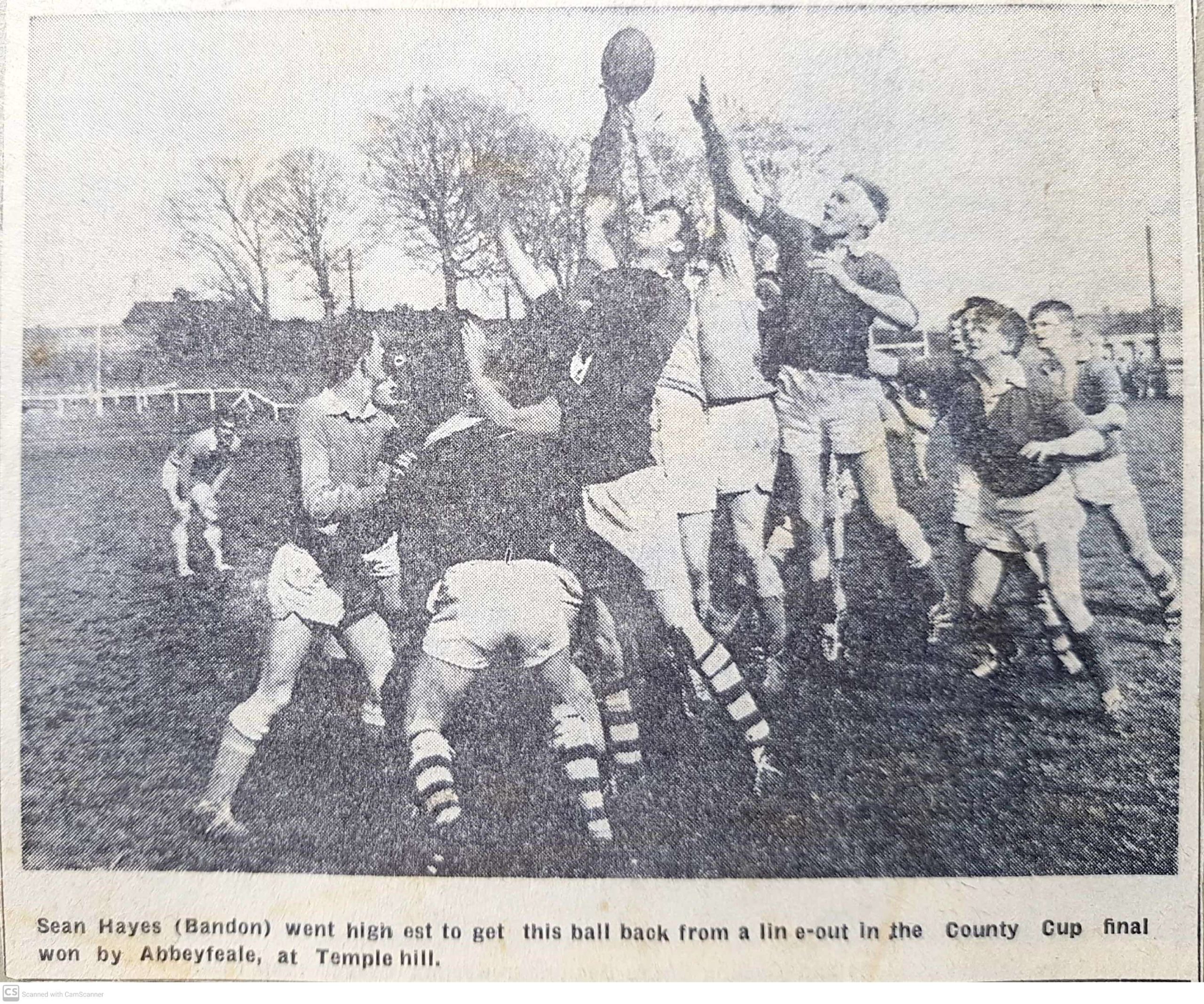 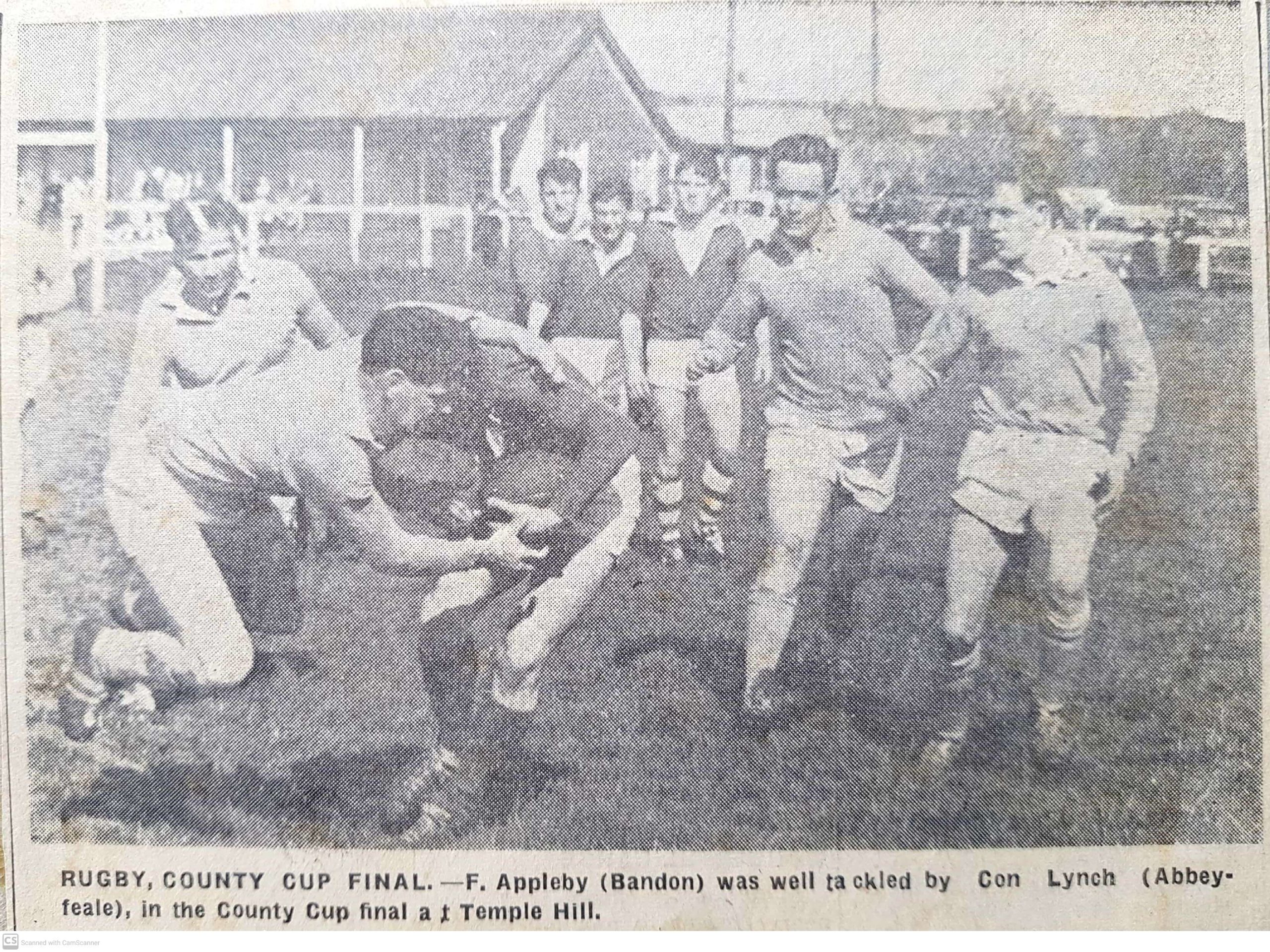 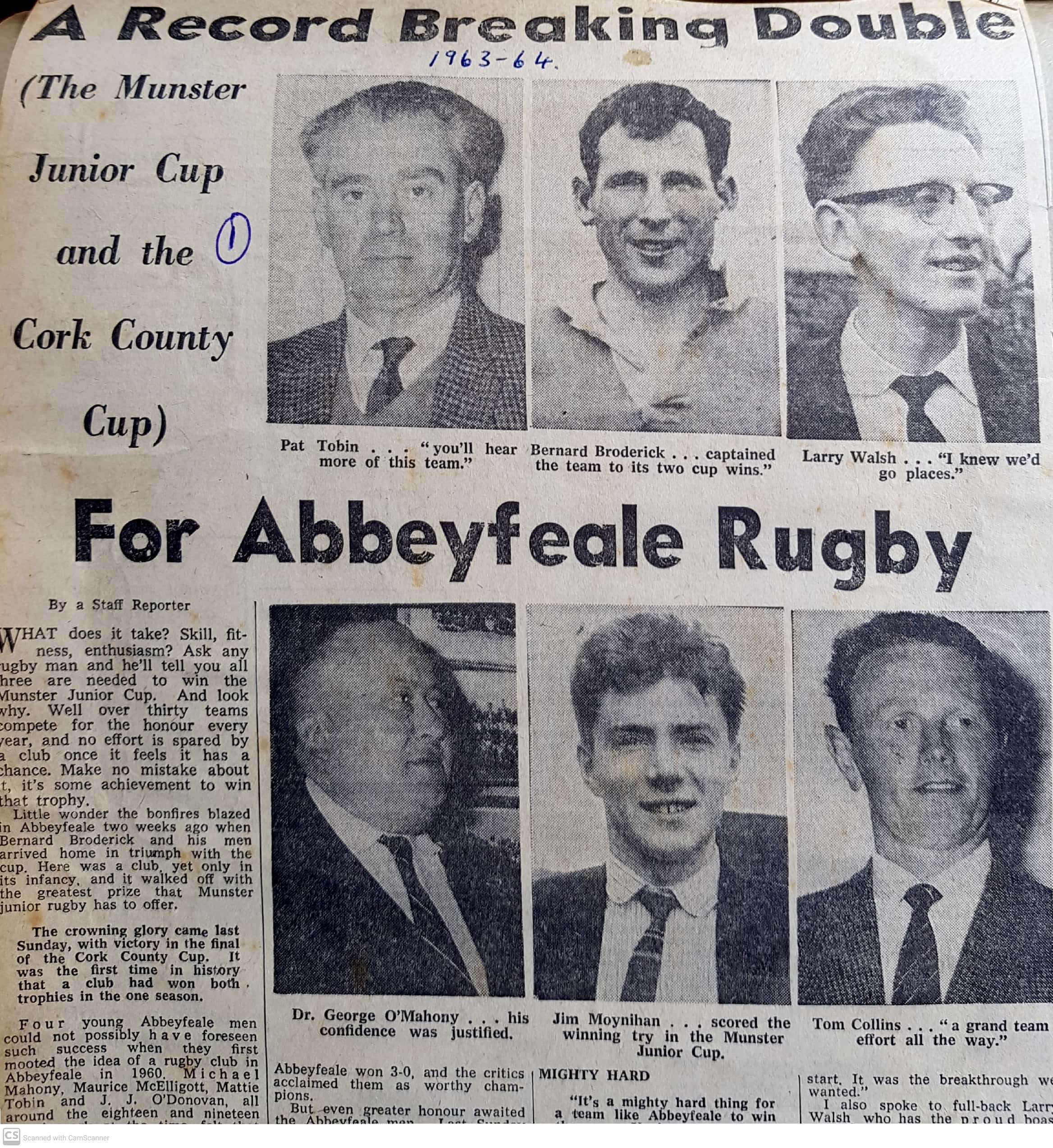 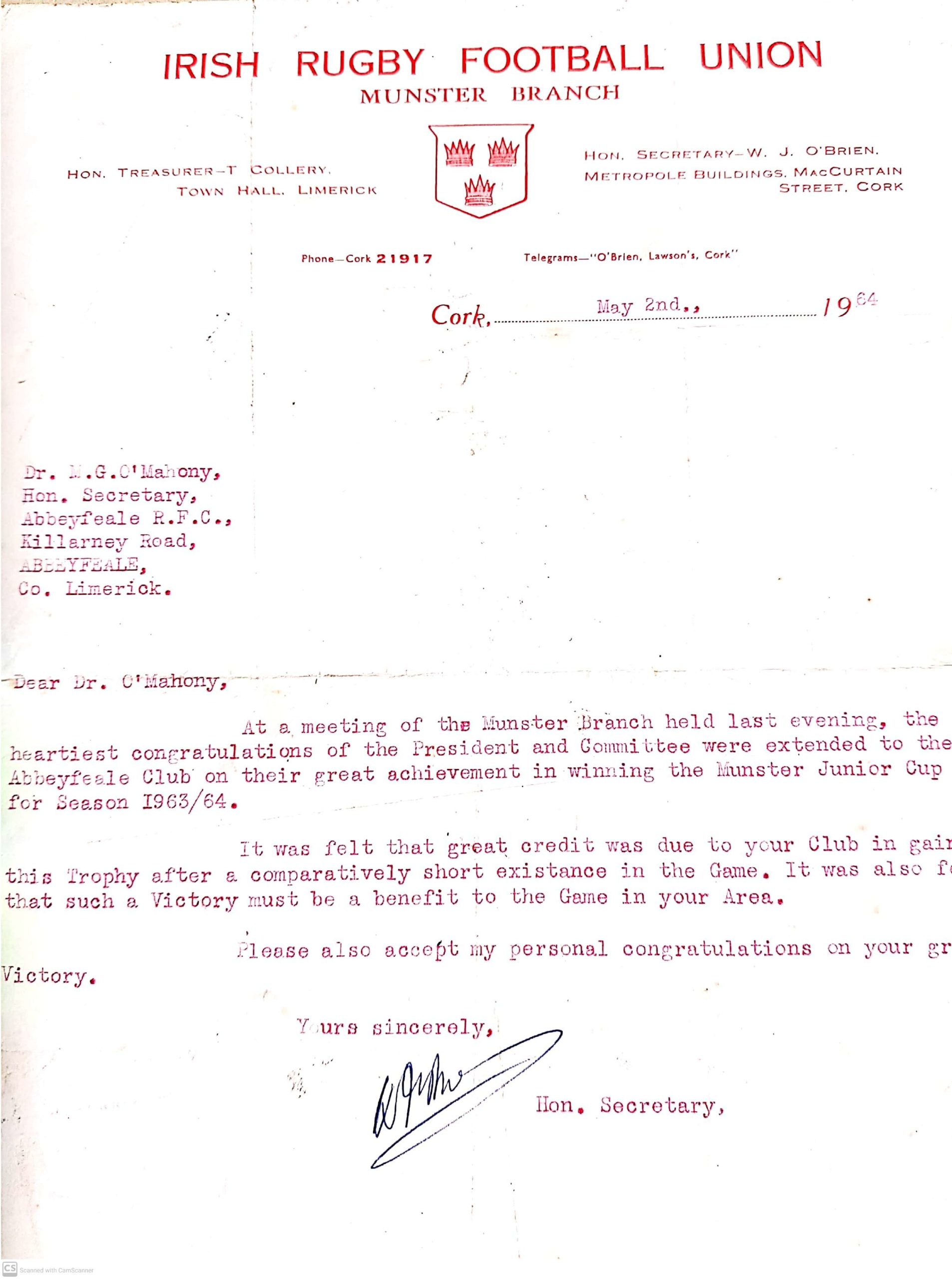